I wanted to write down some of my thoughts on end-to-end testing, mainly to help clarify my own thinking.

What Is The Goal Of Testing?

Let’s start from the beginning. Why do we test at all?

Software tends to become broken over time. Things are constantly changing, and every change has the potential to break things.

Broken software has a variety of costly consequences that we would rather avoid:

Testing is one way to avoid or minimise these consequences.

Testing doesn’t prevent broken software, per se. More accurately: testing detects broken software earlier, reducing the cost. The same defect might take a few seconds to fix if detected immediately as the developer introduced it, or many person-hours of work if detected at in later QA stage before deployment, or incredible amounts of time and money if detected after being deployed to production for a few weeks.

There are a variety of different ways that software can be tested, and they can roughly be placed on a continuum from “low-level” to “high-level”.

Broadly speaking, moving a test higher up the continuum makes it more “real”, which gives higher confidence but is more expensive. To put it another way, it reduces the likelihood of false positives (i.e. passing when a defect exists) but also increases the cost of writing, maintaining, and running the test. Conversely, moving a test lower down the continuum makes it cheaper but less likely to detect defects.

So for the same investment, we can get:

But you get what you pay for — unit tests do not provide much confidence that the entire system works appropriately in production for real users.

The next step up are tests of groups of units, with some or all of their real dependencies in place. For example, this might be a test of a command class like PublishBlogPost, which checks that the database (a dependency) is modified as expected.

Compared to isolated unit tests, these:

A test at the very highest level would exercise the software exactly how real users would. There would be no difference between what the test sees and what real users see. You probably already have a test environment up and running for this this, called something like “production”. Humans exercising production is the ultimate test of any software system — either it really works, or it really doesn’t.

The drawback of testing in production is the cost. Back near the start I said that the aim of testing is to reduce costs by detecting defects earlier, so it might sound a bit ridiculous to test at the final and most expensive stage. And it can be, but there are approaches like A/B testing and feature flags which are economical, and sometimes the best choice. If you reframe “testing in production” as “monitoring and alerting”, suddenly it sounds a lot more sensible.

Testing in production is not what I’m trying to cover here, although it is an interesting topic. Let me summarise by stealing a graphic from some scientific research by Erik Bernhardsson. 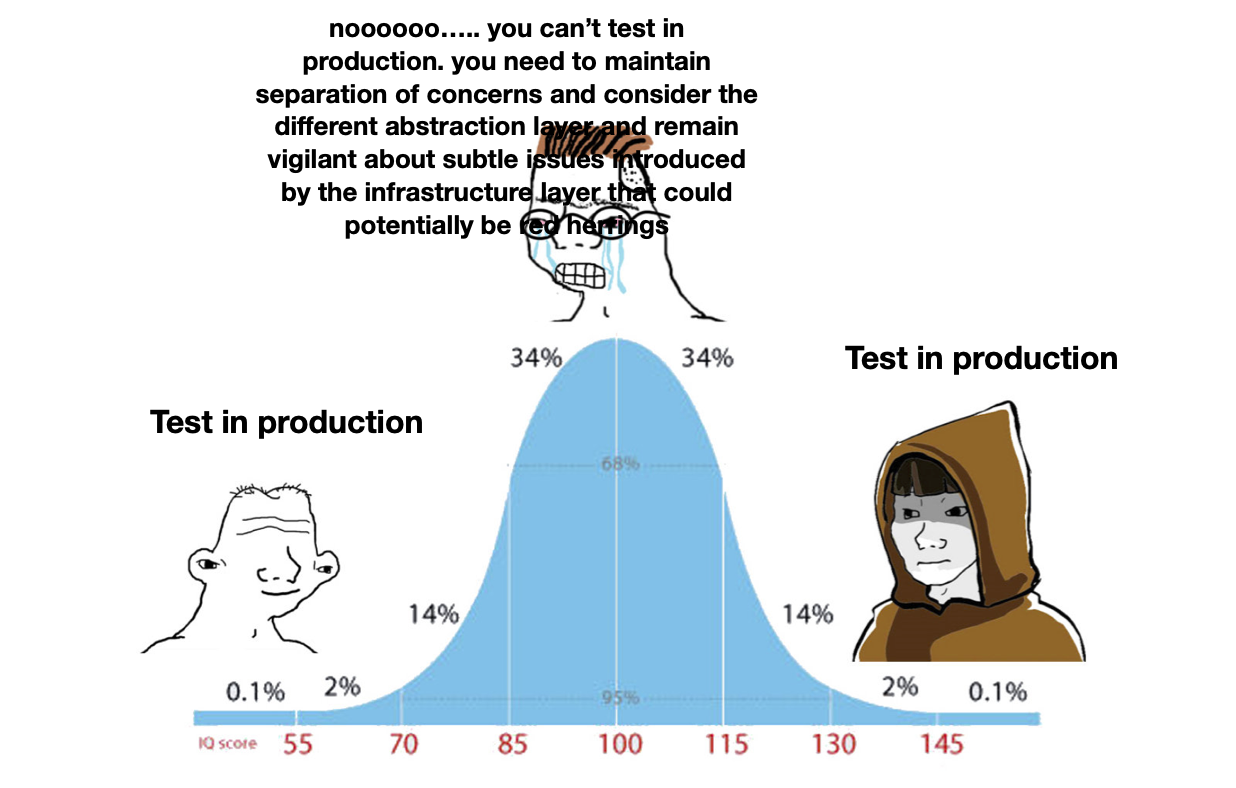 Coming back to the intended topic: end-to-end testing, in my mind, is supposed to be as high up the continuum as it can be without using real human users or production. The idea is to boot up the entire system, and exercise it in a way that is as realistic as possible while being fully automated.

Why? To detect problems earlier than production, with a high level of confidence, at a reasonable price. We could get a higher level of confidence before production in other ways, but they tend to involve humans, which makes them too expensive to run dozens of times per day. We could get cheaper tests by moving down the continuum, but we would also lose confidence. End-to-end tests will pick up defects that lower-level tests can not.

When To Use Them

Let’s say we run an image sharing website. It’s probably quite important that users are able to sign up, upload an image, and share a link to that image. It would be a major problem if any part of that workflow was broken, considering that it’s the primary use case of the software. This is a good candidate for end-to-end testing. The test set up might be nasty and complicated. It might take 30 seconds to run. It might give false negatives and need to be fixed up on a semi-regular basis. But I image that we’re probably happy to pay that price for confidence that our image sharing site can share images.

However, if every test was that expensive, we would quickly run into problems. The test suite would take so long to run, and be so hard to work with, that developers would just abandon it in an attempt to get any work done.

So, I think the best approach is to write end-to-end tests for a small number of highly important workflows. When it comes to the numerous edge cases and finer details, end-to-end tests are cost prohibitive, so for those it’s better to step down to one of the lower levels.

Another good candidate is anything that charges money. Customers get pissed off when they pay for something and it doesn’t work. They also don’t like being overcharged. And the business really doesn’t like when their ability to generate revenue is broken. These defects are fairly high on the list of things the business wants to avoid, so it might make sense to write tests for the amounts charged in various realistic scenarios.

The most realistic way to test external dependencies is to actually hit them from the tests. This is usually not feasible, though.

The next best thing is to use some kind of sandbox system provided by the creators of the dependency. Most dependencies will not have sandboxes, unfortunately.

The next most realistic option is to configure the system with a replacement dependency. For example, if we’re talking about sending emails via SMTP, it’s possible to point the system at a different SMTP server for testing purposes. Most dependencies are not that easy to replace, however.

It’s a common situation to integrate with an external system that:

We could write a separate web app that implements their custom API. This is not unheard of (e.g. stripe-mock) but is a lot of effort and not necessarily a realistic simulation of production.

In this situation I think it makes sense to design an adapter interface for the dependency within the codebase, and swap out the real adapter for a test adapter. Test adapters run faster, are less flaky, don’t require an internet connection, and can make testing different kinds of scenarios a whole lot easier. I’m a big fan of this approach, despite recommending to avoid mocking in general. It’s less realistic, but has so many other advantages that I’m generally happy to make that trade-off. Similar to the common saying “don’t mock what you own”, my view is that mocking is acceptable at the boundaries but undesirable for internals.

Test adapter behaviour can easily fall out of sync with the real adapter, and some amount of effort should be spent guarding against this. This is the point where contract testing (e.g. Pact) becomes useful. This is also a good candidate for testing in production, if the adapter can’t realistically be tested in any other environment.

I should also mention that the primary database for a web application is typically not an external dependency, even if it runs on separate servers. If a database is controlled by some third party, or is perhaps write-only, then I can see how it could be viewed as an external dependency. But if the developers of the web app are writing migrations, then the database is an internal implementation detail and therefore should not be queried by end-to-end tests.

Of all the different kinds of automated tests, end-to-end tests give the highest level of confidence, short of testing in production. They will detect integration defects that lower-level tests can not. Their main drawback is that they are relatively expensive, and as such should only be used sparingly, for workflows important enough to justify the cost.

The test environment should mimic production as closely as possible, so mocking should be avoided. The exception to this is at the boundaries of the system, where mocking out external dependencies is advantageous enough to justify the reduction in confidence.

Tests should exercise the system from the boundaries, in a way that is as similar as possible to how the live production system is used. This typically means driving a headless browser. Tests should not be peaking into the database, or checking that specific functions were run, because this does not simulate realistic usage.

The UI is not the only interface at the boundary. Communication with external systems should also be tested, to ensure that the software produces the expected side effects (e.g. sending emails) and handles programmatic users (e.g. API clients, webhooks) appropriately too.